Not too long ago I had the privilege of attending an elegant dinner with my fiance, Chris. It was an evening I was very much looking forward to, although I always feel out of place at these things. We dined in a castle, seated at a long table with couples from Germany, Canada, the U.S., and China. Eventually, and inevitably, the discussion turned to politics and the upcoming U.S. election.

We all felt the shift. The debate had been lingering in the air since the moment we all exchanged our locations and professions, and now the conversation began its inexorable slide as palpably as if someone had lifted one side of the table, sending the wine glasses, salt shakers and plates careening toward the floor.

The U.S. couple were wealthy, well-traveled and pro-Trump. I had never met any Trump supporters in person before. My previous encounters had been confined to chat-rooms and news article comment sections, where Trump supporters are easily identified by the usage of CAPITAL LETTERS, hate-filled rhetoric and fear-mongering.

I, too, am filled with dissatisfaction and pessimism in our global leaders and their actions (or inaction) on racism and misogyny, climate change (watch Before the Flood), allowing big corporations to influence policy for their own short-term gains, and the proliferation of wars, which lead to refugees, which lead to more wars… Chris, bless him, remains pragmatically optimistic about our future. Some days, I find it very difficult.

And during this elegant dinner, I found it impossible. I stood toe-to-toe with the wife of this Trump-supporting couple and launched into a verbal slug-fest that cast a long shadow across the rest of the evening.

I was, and still am, ashamed of my lack of social graces. First of all, as a former boxer, I know that toe-to-toe slug-fests should be avoided at any cost. It’s not smart. Second, I knew better. I was never going to change her opinion, any more than she was going to change mine.

Chris knew that. He sat armed with logic, facts and reasonable arguments, but quickly assessed that this particular battle was futile, and it wasn’t the time or place to make a stand. I learned a lot from him that night.

This election… it’s not just dividing the U.S., it’s carving a line in the global sand. Just like there was a time not too long ago where we weren’t supposed to mention the war, perhaps in the future it will be: don’t mention the election.

The next few days will be interesting. I wonder how future generations will look back on it. Remember, remember the 8th of November…. 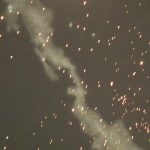