A Place of Revelations

“The world is good despite my sighs.” – Nikos Kazantzakis

Chris and I have both spent time in Greece in our younger years.

When Chris was between six and nine years old, he spent about two collective years in the Greek Islands, particularly on the island of Patmos, renowned for its Cave of the Apocalypse, where legend tells that St. John the Theologian wrote the Book of Revelations.

For Chris, Patmos was a different kind of revelation. It was here his fascination with the sea began, and he remembers running down the dirt track to swim in its sapphire depths daily. He stayed in a tiny hut without neighbors, power, or running water. (Water needed to be fetched from the local well.) He fell in love with Greek food, particularly the cheese and a casserole-like dish called pastichio.

There’s something about these places that we walk and love as children that get under the skin. They are comforting to return to. Familiar. Family. The moment we arrived in Athens, Chris both relaxed and sparked alive. It was a type of homecoming for him.

On our first day on Alonissos, we followed the old donkey trail connecting the main town of Patitiri with the Old Town, which used to be the main town until a 1965 earthquake shook the houses to their bones. About halfway along the trail, Chris suddenly realized he had walked this track before as a child. He remembered the view. He remembered a swaying sea of wildflowers.

Shortly after that moment, we encountered a British expatriate who had been living in Alonissos on and off for 40 years. He was resting on the stone wall in the shade, next to a stand featuring a stack of carefully placed books – copies of his memoirs of his time in Greece. Chris and I began paging through the book, and Chris discovered a picture of the trail, hemmed in by wildflowers, taken right around the time that he would have visited the island. For him, it was like walking into a memory.

For me, Greece was another revelation altogether. I spent a month here when I was 19, traveling to Athens, Crete, Nafplio, Olympia, and Delphi. It was my first big overseas trip on my own, and my memories involve a lot of getting myself in and out of trouble.

Like most impressionable youngsters on their first eye-opening journey, I became obsessed with Greece for a while. I memorized the mythology. I poured over maps. I read a lot of Homer, Socrates, and Plato. But it was the writings of author Nikos Kazantzakis that spoke most clearly to me. The Last Temptation of Christ (1955) is still one of my all-time favorites. I am not a religious person, but Kazantzakis’ portrait of Jesus Christ is one I could identify with. And, perhaps, if religion was more aligned with that portrayal, I might have believed differently. It’s difficult to say.

Regardless, this bold and unusual depiction landed the deeply religious Kazantzakis’ in the hot seat with the Greek Orthodox Church, who campaigned to to excommunicate him. He responded with grace, and stuck to his art. I can’t imagine how difficult that must have been.

For me, Greece doesn’t bring feelings of peace or familiarity, but of wakefulness. I remember the feeling of sparking with ideas, bright and prickly.

And so it continues. Chris and I came across ideas here that we are keen to pursue. We met a collection of wonderful new friends we very much hope to see again in the future. And, of course, we ate our weight in the local cuisine.

A wonderful adventure, proving once again the world is good despite my sighs. 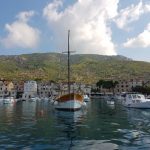 Trying It On For Size2018 Blog Archive 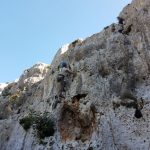