Trying It On For Size

“Now, being in Africa, I was hungry for more of it, the changes of the seasons, the rains with no need to travel, the discomforts that you paid to make it real, the names of the trees, of the small animals, and all the birds, to know the language and have time to be in it and to move slowly. I had loved country all my life; the country was always better than the people. I could only care about people a very few at a time.” – Ernest Hemingway, Green Hills of Africa.

I try on different countries the way I try on clothes. I like to slip on destinations, wear them around for a while, imagine what my life would be like were I a part of this place, if it were a part of me.

I know first-hand how difficult it can be to make another country your home. I moved to New Zealand almost 15 years ago, and that was no easy feat. Every day-to-day activity takes more time, is that little bit harder, because it is unfamiliar. It wears you down unbelievably quickly, as does the newness and strangeness of the world around you. I never realized how much information we assimilate as children until I moved to New Zealand. Suddenly, I no longer knew the names of the trees; I didn’t recognize the bird-song. I learned them, sure, but I didn’t know them. They’re not part of my blood.

When we travel, that newness is inspiring. When you call a new place home, it can be isolating.

I still holiday daydream, but I do so cautiously. Chris and I fell in love with the Croatian islands of Hvar, and especially Vis, beautiful seaside towns with cobblestones polished brightly from thousands upon thousands of footsteps; stone buildings with old women leaning out the wooden shutters (“the world’s best security system”, one local told me) talking across narrow alleyways; that sapphire blue of the Adriatic, an ocean that feels as old and well-used as the Appalachian Mountains. We talked about living here, perhaps for a summer, with Chris off diving and me writing next to one of those wooden-shuttered windows, open to the sea breeze and noise rising up from the street. It’s a pleasant picture, and one I tried on with relish. Perhaps we’ll even give it a try one day, spend time here, even though I know the reality will be nothing like my daydreaming. It will be more wonderful and challenging than my daydreams could do credit. These things always are.

At the same time as I was Hvar-dreaming, I was finishing up Ernest Hemingway’s Green Hills of Africa. I struggle with Hemingway. I either love his writing (like The Old Man and the Sea) or I flounder in the story (For Whom the Bell Tolls).

The Green Hills of Africa is Hemingway’s account of big game hunting in Africa, at a time when Africa was at the height of turn-of-the-century romantic nostalgia, an incredibly difficult and rewarding place for foreigners to travel and live. Hemingway writes about the landscape, the characters, and the animals (even though he’s hunting them) with vivid detail and reverence, and it’s beautiful to read. It’s a book that filled me with wanderlust and the smells I remember from my visits to Botswana, Namibia, and Zimbabwe.

Hemingway tried on Tanzania and found that it suited him. I suspect he left his heart there, to roam wild even after he had left. Most people associate him with Spain, with Cuba, with the Florida Keys, but he writes about Africa as a love letter. There are photographs of him, hard and fit (most likely due to his bout of dysentery), grinning and at peace. He is magnificent.

We leave Croatia tomorrow to try Greece on for size, a country Chris spent a lot of his childhood in. He remembers Alonissos filled with wildflowers. He remembers the sea, and the taste of the food. (He’s been looking forward to the food since before we left.) He’s interested to see if the place is how he remembers it.

I will be, too – I haven’t been back since I was 19 years old. That was many lifetimes ago. 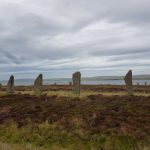 There Is No Present Like the Time2018 Blog Archive 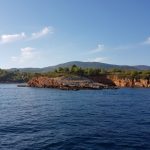 A Place of Revelations2018 Blog Archive